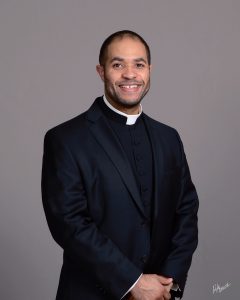 Fr. Robert P. Boxie, III, a  native of Lake Charles, Louisiana, is the chaplain at Howard University and the priest-in-residence at Immaculate Conception. He had been the parochial vicar at St. Joseph Catholic Church in Largo, Maryland since July 2017, and was ordained to the priesthood in June 2016 for the Archdiocese of Washington. After graduating from Vanderbilt University, with a degree in chemical engineering and a second major in music, he worked a year abroad in France teaching English as a language assistant at a French high school. Upon returning to the United States, he enrolled at Harvard Law school and graduated in 2007, after which he landed a federal clerkship at the federal court in Greenbelt, Maryland. He then worked for a couple of years at a law firm in Washington, D.C., all while discerning seminary and priesthood. With much prayer and discernment and with the assistance of good spiritual advisors, he decided to enter seminary for the Archdiocese of Washington, beginning his seminary studies in philosophy at Theological College at the Catholic University of America. Thereafter, he was sent to continue his theological studies in Rome at the Pontifical North American College and the Gregorian University and completed his degrees in the summer of 2017. Fr. Boxie is an avid runner, tennis player, and a classical music junkie. He also enjoys going to the gym, traveling, reading, sacred art, and spending time with family and friends.